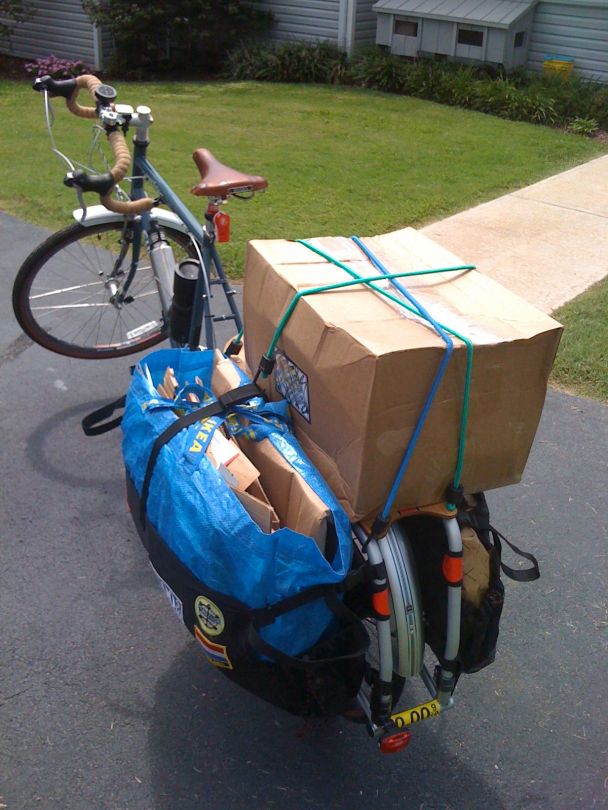 It’s been kind of a scattered few weeks.  Lots of miscellany.  People coming and going.  Different days with different rides.  Here is a sampling (although I’m leaving alot of the mundane, like grocery-getting).

The picture above was a box of ‘stuff’ that son Mason forgot, and subsequently decided he wanted shipped to college.  So I packed his box, and took along some recycling to drop off, thankful as always to the trusty Xtracycle. 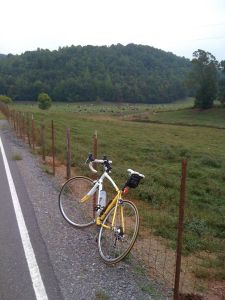 I still get out on the roadbike a few times a week, simply for recreation and to clear my head.  I visit with the cows.  On the day I took this shot, I had seen a newborn calf being attended to by his mother.  I think he had to be only hours old.  I was a little concerned about him being left out in the open with a storm brewing – yes, I’m ridiculous.  I rode by the farm a few days later and ran into the farmer.  When I asked about the calf, he said both calf and mother were shipped off to a different farm – actually just up our road a bit – because he doesn’t typically keep the little ones around his place. 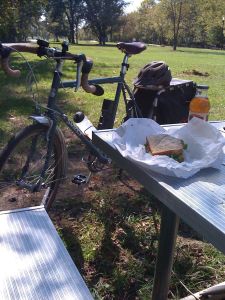 When errands take me into town, I like to utilize the Greenway as much as I can.  We’ve started to have the beautiful fall temps, and it’s nice to pick up a sandwich from Gardner’s Market and stop for a lunch break at on of the picnic tables along the Greenway. 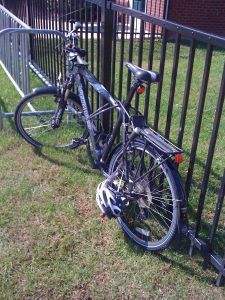 mountain bike at the Y

Lately, when I’m not on the Xtracycle, I’ve been taking my mountain bike around town and to the YMCA to swim.  I used to take the road bike, but got tired of repairing flats from all of the junk that’s on the roads around here.  The mountain bike and the Xtracycle have puncture-resistant tires, which makes a big difference.  (In my aggravation level, if nothing else). 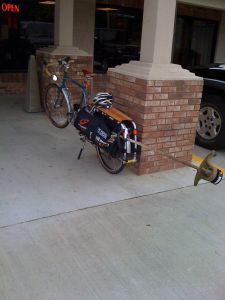 We’ve hauled some goofy stuff by Xtracycle, and I will include the weedeater in that list.  Had to take it in to be repaired (after Mark tried everything he could think of himself), and I know I got a few stares along the way, with the thing sticking out the back.  Oh well.  Just call me Crazy Bike Lady.

Someday I hope I will live in a place where I’m not looked upon as such an oddity – carrying boxes, weedeaters, small trees, etc.  Someplace like Portland, or Seattle, or Amsterdam, or wherever … where people ride bikes and do amazing things on their bikes.  And it all seems normal.