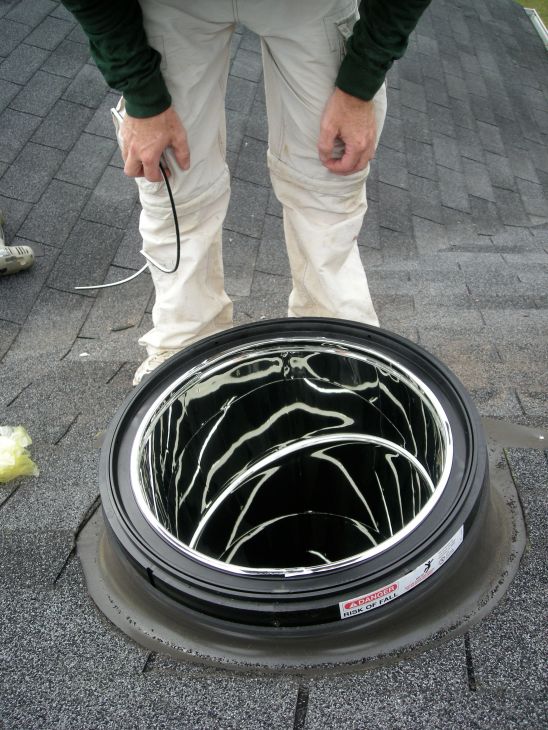 installing one of our Sun Tunnel lights ('08)

Yes – unplug, turn it off, turn it down, try to eliminate some of the electricity-sucking devices that we don’t need powered up, and that we probably won’t miss.

Initially, I had considered going to the breaker box and shutting everything down for a day, just to try it.  And then I remembered my freezer full of blueberries and other items painstakingly gathered and frozen … so, I shelved that idea.  But I did live the day without turning on television, radio, lights, and limiting my computer time to 20 minutes (largely for writing these posts).

If I had the means to make one major change in our home, it would be to go off the grid and have a usable system of solar power, or other clean, renewable energy.  Even having just a solar water-heating system would make me pretty giddy.  We’re just not there yet.  We have a friend who works for TVA, and he said they are trying to bring some initiatives into the area – including home solar and wind installations that would enable people to sell excess power back to the grid, etc.  But I think it’s going to be a long, slow road to get there.

We have made a few great changes over the past couple of years to decrease our power usage, as well as buying kilowatt hours of “green” energy from TVA’s Green Power Switch.

Last year we installed two solar tunnel lights – one in our kitchen and the other in our laundry room.  With the highly reflective tunnel surface, it’s amazing how much light we receive – enough that on most days/most of the time, we don’t need to turn on the electric ceiling fixtures during the day.  I would actually love to have one of these in every room (which would probably result in making our roof look like swiss cheese or a bubble farm, so it probably won’t happen). But it’s a great, reasonably-priced and fairly easy to install passive solar project. 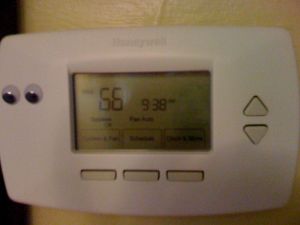 Probably the biggest energy-saving device we have installed is a programmable thermostat.  I think I tend to take a little bit of grief over the temperatures I have programmed in – I keep the house pretty chilly in the colder months, and I have heard about it, trust me.  But looking at our historic monthly electricity usage, all the little changes have added up, and we are definitely using less electricity than before some of these changes.

Of course we have made many of the typical changes – switching lightbulbs, insultating/turning down the water heater, drying clothes on our clothesline, unplugging unused appliances and charging devices, etc.  We even have a few silly items, like my portable solar charger for my iPod, and Dillon’s nifty solar-panel book bag. I know that using my iPod charger isn’t really making any significant dent in our energy usage, but it’s been a pretty fun little gadget to have – especially for biking and on our bikamping trips.

There are a number of things that we haven’t “unplugged” from – mainly television, cablebox/disc player, and … computers.  It’s the silly addictions to our variety of electronics that pains me, but I still can’t bring myself to pull away from.

The Experiment Guide posed this question: What is the hardest part about reducing the amount of energy you use?

For me, it is definitely electronic gadgets – from my computer to my iPod to my Kindle.  During the Experiment I have consciously been trying to limit my time spent messing about on my computer.  I think setting time limits could be a good compromise, and we’ll have to see if I can stick with it.  Kind of sadly, I guess, my computer has become a source of socialization – from email to my Twitter friends to keying my thoughts on this silly blog.  I don’t think I’m alone.  After all, this entire No Impact Experiment revolves around a group of people in random places brought together through an internet adventure.

Maybe I really do need to transition to more frequent direct human contact? 😉