no impact experiment – day 7: giving back 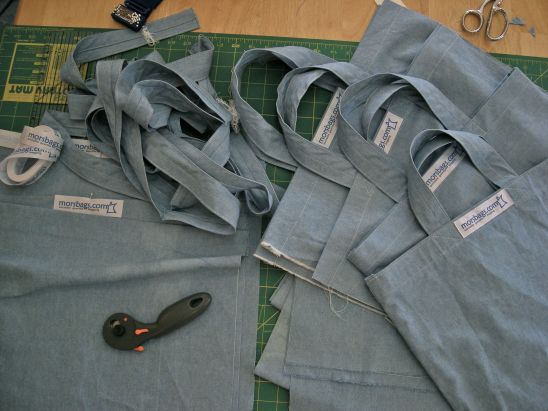 Today’s Experiment challenge: “to be charitable, to act in good faith, to become one with others, give back and share some of your exuberance with others.”

I didn’t make an actual list of ways I (am)/can/should contribute to my community.  I fear it is an area I where I often fall short, although I think good intentions to make a difference are always in the back of my mind.

My dear friend, Peggy in CA, had sent me a link to an interesting website a while back – Morsbags: Sociable Guerilla Bagging.  The idea behind the grass-roots project, based in the U.K., was to form local sewing groups, or “pods” as they are called, where people get together to sew re-usable shopping bags from reclaimed fabric and subsequently distribute the finished bags to the public for free. The Morsbags project has turned into a global effort, with pods around the world, and over 52,000 bags sewn and given away.  From the founder of Morsbags:

I created Morsbags because i live on a canal and endless plastic bags float by like urban jellyfish.  I grew up on the coast in Devon where the beaches were, and still are, strewn with plastic bags.  Whenever I am in a supermarket, I am boggled by the staggering amount of plastic bags being freely offered to shoppers who habitually forget that they are not the only option.

I have officially registered a local pod with Morsbags, the shebicycles pod in Cleveland/Bradley County, TN, and have begun sewing bags.  Next step is to try to recruit some other local folks to join in … this part I am still working on.  After this week, and participating in the Experiment, I think I have a little more motivation to get this thing rolling, and start trying to recruit a few others to join.  (If you’re reading this and are interested, just contact me … heh heh ;-). 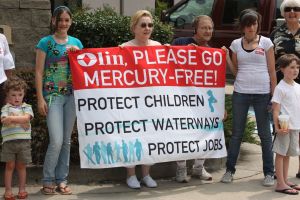 As for other local activism projects, I am still trying to stay involved in the battle against Olin, and advocating for the passage of legislation that will ban their destructive mercury-based manufacturing.  I’ve posted about this before (see battling Olin, July 15), and the recent good news is that as of Oct. 21, members of the U.S. House Energy and Commerce Committee voted 29-14 to pass H.R. 2190 out of committee, which would require chlor-alkali plants to end their use of mercury-based technology in chlorine and caustic soda production.

When it is passed (not “if”) this bill will affect our local Olin plant, and the bill states that this plant, and any remaining plants still using mercury, must inform the EPA administrator by 2012 whether the plant will close or convert.  My Oceana friend, Suzanne, will be taping a segment on our local NPR station (WTCI) this coming week, explaining the mercury issue and the legislation at hand – I can’t wait to hear her!

I don’t know what stipulations are included or will be made to effect any type of clean-up of the mercury-laden river sediment, but at least the dumping will come to an end.  We’re all feeling more hopeful these days.

The Experiment encourages us to “Practice what you preach.  Give.  Do.  Help.  Change.  In other words, sign up today to volunteer for a local environmental cause.” And what would I most like to do from an advocacy standpoint?  Yes – bikes.  Over and over, I keep coming back to the same place in my mind … I would love to start/be involved in an advocacy group to promote bicycle commuting, to improve local cycling (and pedestrian) infrastructure, and aid in education/driver awareness.  My local bike shop guy, Charles at Trailhead, has helped form a new non-profit group called BeCog (Bicycling Enthusiasts of Cleveland & Ocoee Group).  While I think their initial goals involve staging “events”, I am hoping that we can include bicycle commuting/advocacy into the group.  We’ll see.

I need to just need to find the energy to push past my hesitation to get started.  I guess my mantra needs to come from the words in the Experment: Practice what you preach. Do.  Help.  Change.