A little over a month ago we did it.  Went “rogue” and bought an electric bike. I know, I know – I’ve heard the cries:  “what’s wrong with your legs?”, “hey, isn’t that cheating?”.   I have to admit I had reservations.  Venturing into what seemed like “pseudo-cycling” did feel a bit traitorous.  If it wasn’t human-powered, why not just drive a car?

We made at least three trips to Chattanooga Electric Bikes.  I took test drives.  I left, undecided.  I went back again and took another test drive.  I left.  It was hard to bring myself to make the sacrilegious leap to something that I viewed as, yes – the wimp’s way out.  I adored getting around on the Xtracycle, enjoyed long rides on the road bike, and even occasional errand-running on my mtn-bike-turned-commuter-bike … but something kept pulling me toward some electrical assistance. (Maybe it was my impending 49th birthday and fading sense of invincibility?)

Like the days I took l road rides (40+ mi), and arrived home to find out I needed to get into town for some reason (shopping, an appointment, an errand) – and I just didn’t feel like getting back in the saddle and humping up “The Big Hill”.  Also the days when I headed to the Y for swimming and weight training – it’s a nasty uphill slog on bad roads with alot of traffic; my least favorite ride. Many times I’d arrive at the Y, swim, and cut my routine short, because I knew I had to save some leg power to get back home through it all.  Over the past two years, I have discovered that I don’t have the super-powers that I may have had 20 years ago, and sometimes – especially on multi-trip days – a slightly “easier” ride would be very welcome.

So finally, after making Mark nearly crazy with my indecision, we made the plunge and bought the eZip Trailz.  We debated doing a conversion of one of the other (mtn) bikes in the garage, but in the end decided on the Trailz, largely because the pretty small difference in price didn’t seem to justify a conversion ($350+ conversion vs. $500 for complete bike), and there were some questions on compatibility of gearing, etc.

The other factor was the difference in controls.  With the conversion, we’d end up with a single “throttle” lever; the Trailz has a twist throttle with two modes: PAS (Peddle Assist) and TAG (Twist And Go?).  And the final factor (I am sorry to have to say this), the conversions we saw done by the guys at Chattanooga Hybrids were, well, a bit sloppy (wiring, etc.).  We just didn’t get the impression that they were too experienced in bike-building.

So, we got it home, made a few minor modifications – added fenders, lights, and replaced grips and pedals.  Took it out for a real-world test drive – a trip to the Y – and it performed very nicely.  I mostly rode in the TAG mode – allowing me to pedal nearly all of the time, except for places I wanted a little extra power (going up hills).  Riding this in this mode, you can really feel the weight of the bike – it’s a bit of a tank, honestly.  According to the manufacturer’s specs, the bike weighs approximately 70 lbs with one battery (battery alone weighs roughly 12 lbs).  The stock “comfort” tires were another dislike.  And on the very first trip, I managed to get a flat on the way home – a small staple punctured the rear tire.   Then and there, I realized puncture-proof tires were mandatory.

Which brings me to my biggest complaint about the bike at this point.  I’ve done my share of repairing flats, replacing tubes, out on the road – but repairing a rear flat/changing a rear tube or tire on this bike is a royal PAIN. To begin with, there is no documentation available on how to remove and disconnect the rear wheel from the motor and drive – and it is not a job you want to attempt out on the road.  We discovered – only thru internet comments left by other owners – that you have to virtually dis-assemble the whole rear end, removing the motor and drive chain, yadda, yadda, yadda.  Making things even less easy to deal with, the motor is hard-wired (vs. a quick disconnect), so I had to physically hold up the motor housing, while Mark was removing the wheel, etc.  It was a timely, pain-in-the-ass job that I definitely didn’t want to have to deal with again anytime soon, so we promptly replaced the tires with Bontrager Hardcase puncture-proofs.  We also changed the skewer on the front wheel, swapping in a quick-release (a stupid manufacturer omission, in my opinion). 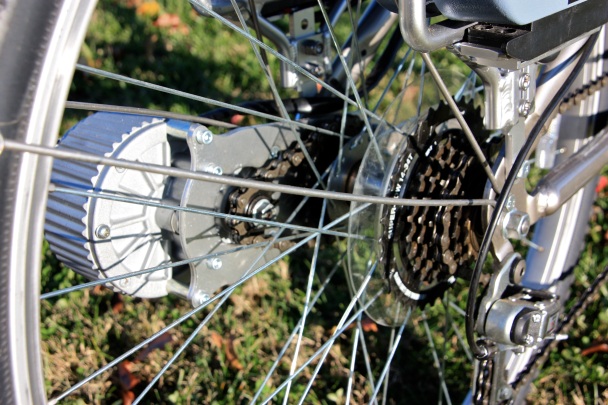 Get puncture-proof tires, PRONTO! You don't want to have to mess with changing a rear flat.

After making the little list of modifications, I have ridden the eBike about once a week, mostly to the Y to swim, but also a trip or two up The Big Hill for a few errands.  After some experimenting, I have found that riding in the PAS (Peddle Assist) mode seems to be the best option for me.  After a few pedal strokes, you can feel the motor slightly “kick in”, but you still have to pedal, downshift on hills, and ride like a normal bike – you feel like you are actually pedaling a bike.  As soon as you break or coast, the assist stops.  I’ve found that it really resembles riding a normal bike on a flatter terrain; you feel the assist primarily when climbing a hill, and you still have to use some leg power.  I can still break a sweat, I can still get the heart pumping – it just tends to “flatten” out a ride on rolling or hilly terrain.

I haven’t quite figured out how many miles I can get on a single charge; I’m finding it largely depends on how much assist and/or throttle frequency is involved.  I know I can travel more than 20 miles in PAS mode around here, hills included. 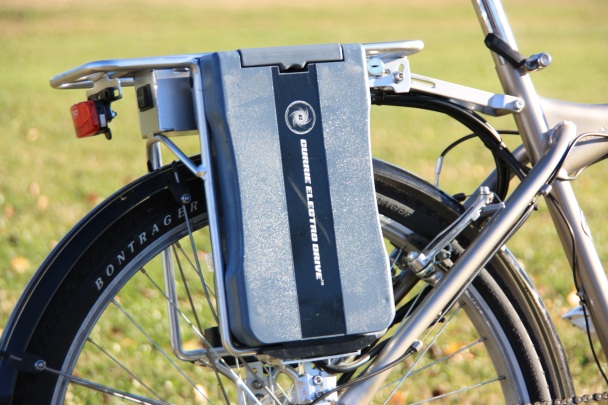 Bottom line (to date): It’s not a bike I believe I will be riding most of the time, but it’s an excellent alternative to driving a car when I just can’t ride a “real” bike.  It’s definitely more of a bicycle than, say, a scooter.  To use it to it’s potential, you need to pedal and shift gears, etc.  If you are looking to drive it “throttle-only”, I think you may be disappointed; I don’t think the battery capacity and power is adequate enough for riding without pedalling – at least for any kind of distance.  I expect it to be a great option in the scorching heat of summer when I need to arrive somewhere and not be a complete sweat-ball.  I’m hoping that Mark and the boys will give it a go occasionally when they need to get somewhere – rather than driving the car.  Aside from the few initial flaws (tires, etc.) we’ve discovered and dealt with, I think it’s a good value for the pricepoint.

Mostly, I really believe that eBikes in general can be a great transportation alternative to people who maybe can’t fully commit to 100% human-powered bicycle commuting.  I can see so many types of people riding bikes like this one – a great alternative to driving a car.  I’ll continue to evaluate, and let you know.