I have no good excuse to dislike Mondays, but I do.   Always feels like I am at the start of a long to-do list, and lacking the needed amount of motivation to get started.

Woke up to find The Band had spent the night, after some late hours practicing; school was out today.  (The Band, incidentally, is The Night Shines – sons Dillon & Grant, along with their friends Boaz and Tim).  Mark was off the the airport, and I was staring at my usual giant pile of Monday morning laundry.  Bleh.

After getting things around the house in some semblance of order, I headed out for a road ride – a little later than initially expected.  Solo today.  Decided to ride near the Hiwassee River, just north of our house.  I think I subconsciously needed a reminder to get back on track with involvement to fight Olin and their mercury-polluting mess … (more of the story on the subject is in my post from July 15, 2009).  Yet again, as I rode past one of the access areas to the river, several people were down fishing – despite the posted warnings of contamination.  I’m glad I rode by today – and then again, I’m not.  I’m getting so tired of waiting for the Mercury Pollution Reduction legislation to be passed.  How much longer?!!!

(Calming down…) We’ve had an incredible string of amazing weather days.  And quite unlike my feelings about Olin, I hope this weather doesn’t change for a long time… 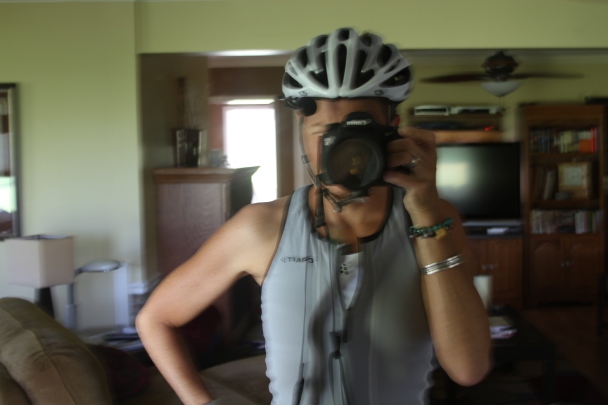 before heading out, taking aim at myself ... 😉