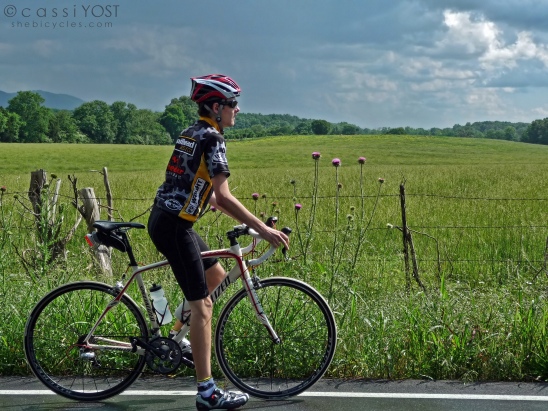 Perhaps the smartest thing I did today was leave the DSLR at home.  (Today’s photos brought to you by Mason’s pocket camera – which, quite miraculously, I managed not to ruin).

So the sun was popping out, along with patches of blue sky, and we figured the rain had finally moved out.  Mason and I decided we were overdue for a nice long road ride.  I cannot tell you why, but something in me decided to leave the “good” camera behind today – and since my little Lumix had a dead battery, Mason offered up his to take along.

taking cover; Mason always manages to keep a smile on his face, regardless of what I drag him through

Around 8 miles out, the rain started.  And unfortunately started really coming down on a more heavily travelled stretch of road, where we encountered some yahoo who decided to pass a truck in the oncoming lane just as we approached – which could have been disastrous had we not had some ample clean shoulder space to move on to.  We made it to a small commercial building that was empty and up for sale, so we stashed the bikes and took shelter on the front porch.  We thought we could wait out the worst of the heavy rain – a plan that worked just fine until some really strong winds started blowing the driving rain onto the porch.  We ended up pretty soaked, thinking how stupid we were not to bring any rain gear, or even a plastic bag to stash phone and camera.  Dumb.  Murphy’s Law of cycling, I guess … but we should have known better.

The rain finally let up and we decided to head back out, debating whether to continue our loop, or just head back home.  Made the decision to stay out.  And about 5 miles further down the road, got caught in a downburst again! This time we were close to a big Baptist church, and found cover under one of their equipment sheds.  Had it not been for having stupid electronic devices with us, I think we would have just continued on in the rain. Time to stick a few ziplock bags in my seat bag.  (You would think I would have learned this by now. Duh).

Finally it let up again.  And the sun came out.  And the rest of the ride was spent drying off in the warm sun.  Totally worth it!    I wish I could bottle the air on a day like this – damp grassy fields, the incredible perfume of honeysuckle in bloom.  This was the reward part. 🙂 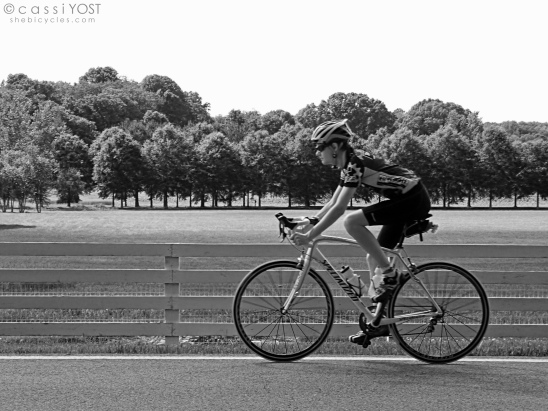 I don't know why I did this in black and white ... I just felt like something different 😛

Comments Off on #330daysofbiking Day 44: dumb and dumber