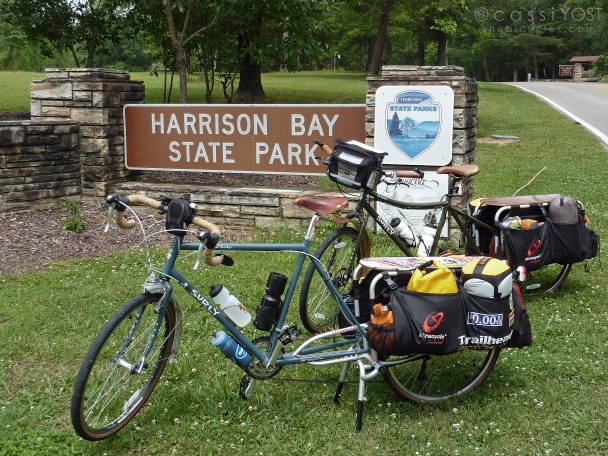 Day 61: Left on Friday for a 3-day bike camping trip, this time heading toward the Tennessee River and Harrison Bay – and a few points beyond. (Full set of photos on my Flickr page.) 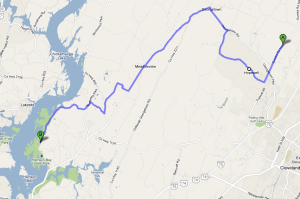 The weather forecast was a little sketchy; scattered showers throughout the weekend.  We decided to camp at Harrison Bay State Park, roughly 27 miles from home – figuring that if it did start raining, we wouldn’t be stuck slogging through bad weather for hours on end.

Fortunately, the weather cooperated and we had a dry ride all the way to the park.  Quiet roads, nice scenery, especially when we approached the river.  Managed to get a campsite along one of the inlets, and had our gear set up and stashed away under a tarp before the rain started.  We headed over to the park’s marina to get some lunch, and while we were there, it started pouring.

Spent the afternoon dodging intermittent showers … had  a  swim, some leisurely time reading in the hammock, a little more riding around within the park.  After dinner we found a nice spot with a swing across from the marina – lovely views of the water, the boats, waterfowl, people fishing.  More rain finally sent us into the tent for the rest of the evening – reading by camplight, and sleep. 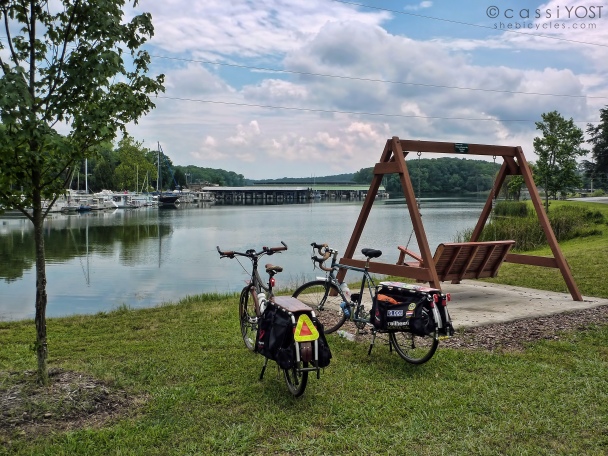 Day 61 - relaxing spot across from the marina 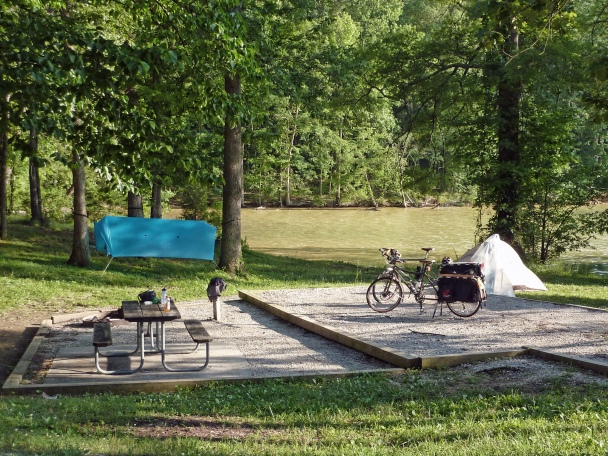 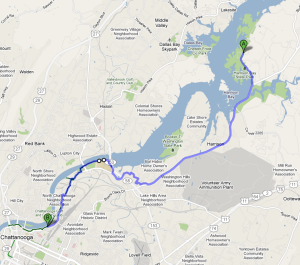 Day 62: Woke up to mist over the water, grey skies.  Beautiful in its own way.  By late morning, the sky began to clear and we decided to make our way down to the Chattanooga Riverwalk/Riverpark.

Parts of this ride were lovely, and other parts were pretty nasty – especially the 6-lane commercial stretch of Hwy 58 as we approached the Riverpark.  Blech.  The weather was really hot, and the humidity was smothering after all of the rain.   Despite the heat, riding along the river offered some great views.

Just as we arrived at the Riverwalk, it started to rain – again.  Fortunately just a quick shower.  We followed the Riverwalk toward downtown Chattanooga, and stopped for a great lunch – alfresco – at The Boathouse along the river.  Sat and enjoyed the shaded canopy and the breeze coming off of the river, lingering over our late lunch for as long as we could.  Finally decided to start heading back.

Returned to the campground for a late afternoon swim.  The weather had finally decided to clear up, and the evening was lovely.  We had a campfire and stayed out under the stars ’till nearly midnight. 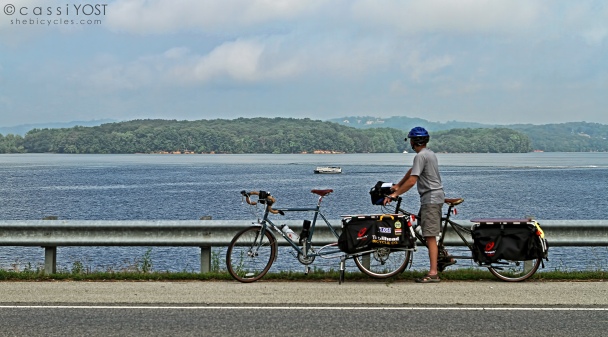 along the Tennessee River 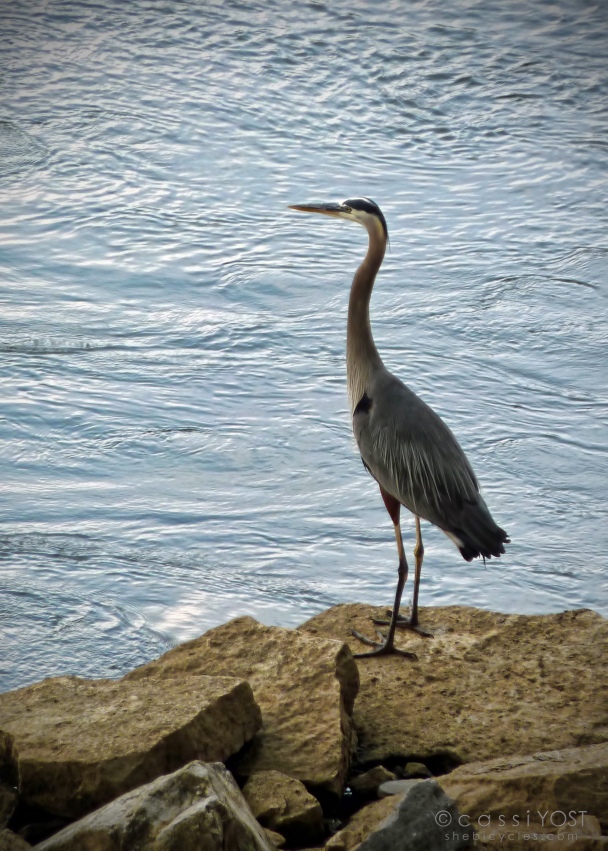 heron on the rocks (TN Riverwalk)

Day 63: Woke again to grey skies and the threat of rain.  Packed up early and decided to head out for home.  Passed through a few very light showers along the way, but nothing terrible.  Humidity was pretty ridiculous, though.

Although it was nice to get home, cool off, clean up … I still wish it wasn’t over.  I love these bike adventures, no matter how brief.  Even in somewhat familiar territory, going by bike always manges to offer a new perspective – new things to see, roads to ride on.   Rain and all, it was wonderful.  Just makes me want to take a bigger adventure.  One of these days…… 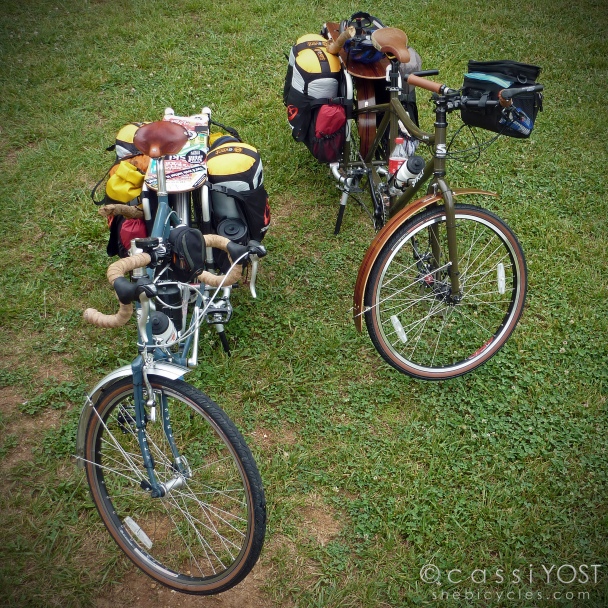 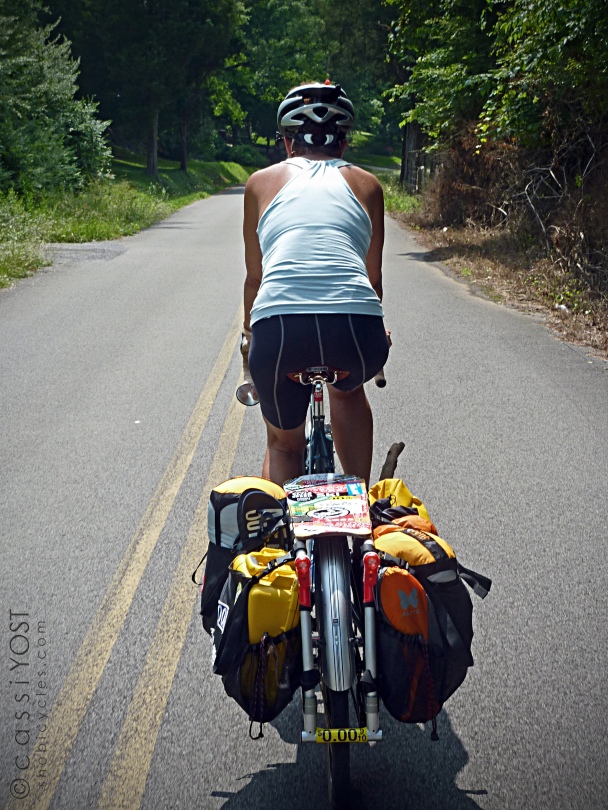