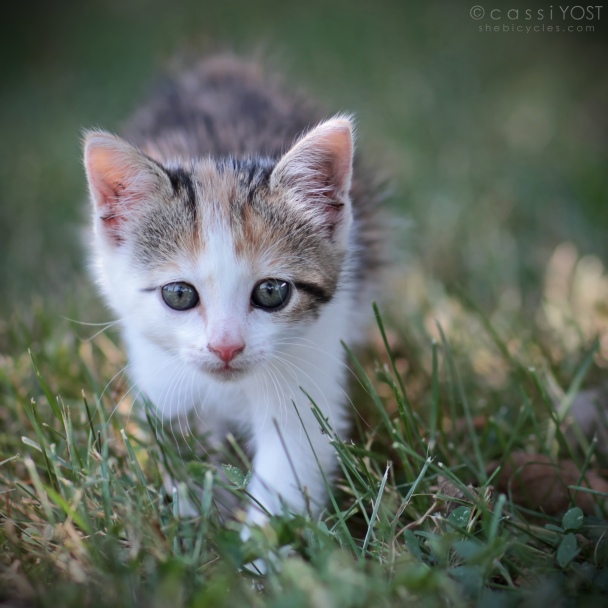 Just don’t even say it.  I am feeling like Angela from The Office without anyone having to make any comments … gaaahhhh!

Kids were here at the house, hanging out today … along with a kitten.  I had the camera.  I couldn’t help myself.  Please don’t hate me.

Mark left this afternoon for a business trip — to France! Although I know it is going to be short, and full of business stuff, and likely not much fun … still, of all of the months to be in France –  during Le Tour de France!  There was some kidding around during dinner last night about him secretly going over to ride in a stage or two, and someone made the comment, “no – more likely going over to be one of the crazy half-naked guys who run alongside the riders in the Alps.” ROFL!

Today’s ride (after all of the kitten cuteness overdosage) was a geocaching-by-bike adventure with the boys, Matt, and Tim.  Neither Matt nor Tim had ever done any geocaching, so this was their introduction to the “sport” and their first find.  We had hidden a cache just up the road a few years back, and it has had a lot of “finders” over the years.  Every time we pass by the site while riding, we’d often talked about stopping to check the log, but never managed to stop. Tonight we decided to head over and  make sure everything was intact – and let Matt and Tim have a go at finding their first cache using our GPS.  Success!

We rode over to a second cache in the area (one that we had never attempted to find), and spent the better part of an hour hunting for it – without success.  We’ll have to check with the cache owner and see what’s up, maybe try again?

All in all, a fun way to do some geocaching and riding … everything is more fun – by bike!