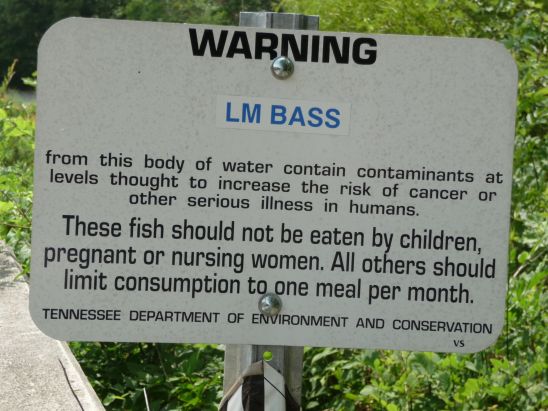 This past Sunday, Mark, Mason, Dillon and I took a ride, crossing over our Hiwassee river bridge once again.  I stopped to take a photo of this warning.  The small sign, which is obscurely placed at the opposite end of the bridge where the put-in and parking areas are, is barely noticeable.  As I said in the previous post, people are continually fishing the quiet waters near the bridge and many fish directly from the bridge.

The small obscure sign, and guy fishing from bridge in the distance.

While we were stopped, we couldn’t help but notice the guy parked and fishing from the bridge and wondering if he had any idea of the toxicity of what he might be catching?

The campaign against the four remaining out-dated chlorine plants  in the country (our Olin is one of them) has been spearheaded by the dedicated and knowledgeable people at Oceana.  The boys and I have been active in several of their community meetings and events directed at Olin and have gotten to know our local Oceana staff member, Suzanne Wisdom.

Earlier this week, I received an email from Suzanne saying that they were planning to deliver a boxful of signed petition cards to Olin headquarters here in Cleveland, accompanied by the Oceana dolphin mascot.  We were invited to join the event.

Earlier this afternoon, a group of concerned local residents joined Suzanne and the Oceana dolphin in the parking lot of the Olin offices.  We quietly and peacefully gathered, holding several signs and a banner, and Suzanne and the dolphin delivered the petition cards.  Since no Olin representative was willing to even come to the lobby to receive the cards or talk to anyone, Suzanne was forced to leave the box with a receptionist.  Oh well, par for the course.

Suzanne Wisdom (Oceana) and the Oceana dolphin deliver the petition cards to the Olin offices.

Suzanne gave me a copy of Oceana’s recent Press Release regarding the introduction of the Senate Bill to eliminate mercury from Chlorine Production within two years.  Here are a few important excerpts:

These chlorine factories release more mercury than the average coal-fired plant, making them top polluters in their states.  A chlor-alkali production facility in Tennessee has historically been the number one source of mercury in the state, and the plant has impaired the river on which it’s located, according to local environmental officials.

Finally, I am sorry but not surprised to report that Olin has apparently contacted Tennessee Senator Lamar Alexander (R), requesting/pressuring him to introduce a new bill that would allow the existing outdated chlorine plants an additional twenty years to come into compliance with mercury-free production.  Senator Alexander, with his less-than-stellar environmental voting record still often touts himself as being Mr. Anti-Mercury … so we’ll see how this play out.  In the meantime, I can only hope that the current Bill S. 1428 will pass by the fall of 2009, and maybe then we can halt this nonsense within two years.  The lingering damage to the river ecosystem and the river sediment is another matter…

More on Oceana and their Mercury-free campaign can be found here.

kayak by Xtracycle ... rides better than it looks, truly

A couple of miles up the road from our house we have a nice put-in to one of the Hiwassee River’s inlets.  Although there is water year-round, it’s most conducive for paddling/boating in the summers when TVA is releasing water to the Hiwassee.  In winter, water levels can get pretty low.

Despite the doubters in the house, I managed to get our old beater kayak loaded onto the Xtracycle and went for a paddle today.  OK, I’ll admit, when I first felt the (off-)balance of the load I wasn’t sure it was going to work.  But surprisingly, upon taking a test ride, I discovered that it was totally do-able – at least for the few miles I had to go.  You kind of naturally make a center-of-gravity shift, but nothing that changes your cycling position dramatically.  There was occasionally a funny little shimmy-shake in the front, especially when on a downhill coast, but pedaling seemed to eliminate it.  Optimum no-shimmy speed seemed to be about 13mph.  Not sure of the physics behind what was going on, but I’d be curious if someone could explain… 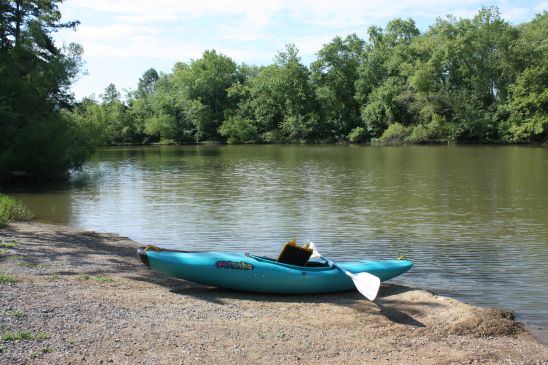 The great thing about this little inlet are all of the little islands and shallow channels – perfect quiet water for meandering about and bird-watching without a beastly motor.  I had barely paddled off when I spotted a Little Green Heron perched overhead (picture of him on the Pix page).  Also saw several Great Blue Herons, and another black and white water bird I have not yet identified.

Strangest event of the trip was spotting a very large creature swimming across one of the channels.  It was huge – bigger than a muskrat or anything I might have expected to see.  As I sat watching, I discovered it was a deer!  She was swimming across the water, only her head sticking out – and had two lovely little fawns trailing behind her!  I had never seen a deer swim before, so this was something pretty amazing for me.

Of course I didn’t have the telephoto lens on the camera, so I did the best I could.  You can just make her out in the distance, doe on either side of her.

doe and fawns, heading for an island

Had a great day exploring, bird-watching … and deer-watching.  When I got back to the put-in, I was greeted by a rather mystified fisherman – a very nice older gentleman who introduced himself as Bill.  Think he was pretty baffled with my boat-on-bike set-up, but offered some help while I was strapping things up, and I enjoyed chatting with him.

We had a brief discussion over the safety of fish consumption from this part of the river.  Thanks to the wonderful folks at Olin Chemical, high levels of mercury in the river sediment and in fish have made it unsafe to consume the catch.  Tennessee Fish & Game and the EPA have posted warning signs, but it doesn’t stop people from fishing.  I was happy to hear that Bill knew about the situation and was strictly a catch-and-release fisherman.  Still, it makes me very sad – especially watching the herons and the other fish-feeding birds and thinking about how it may be harming them and the rest of the ecosystem.

It’s my cyber real-estate, so I can plug for whomever I choose … This is the video made by my amazing 16-year old son, Dillon, for an EPA short video contest on YouTube.  The objective was to produce an original  piece illustrating simple things people can do to protect our watersheds.  I think he did an amazing job – from video to music to editing and all else.  Simple, to-the-point.  He’s my hero!

Comments Off on ten seconds