65 lbs. of concord grapes, ready for a trip on the Xtracycle

There were too many grapes.

Our vines were quite prolific this year, and we still had canned juice from prior years.  I hate to see them wither on the vine and go to waste on the ground, so I decided to cut what remained and take them to our local farmer’s market.  Rather than try and sell them – and to avoid messing with scales, or figuring out a way to package them in sellable amounts – I decided it would be a “grape give-away”.

Farmer's Market folks - getting some grapes, giving to a good cause (WorldBike)

I really wanted to figure out a way to add a bicycling element to this outing, so I decided to pick a bicycle charity, and give any donations I could gather at the market to one of these groups.  There are a number of smaller bicycle charities I was familiar with – and one in particular, WorldBike, which I believe was founded by one of the amazing folks at (Ross Evans?) at Xtracycle.  I did an informal survey with my cycling friends on Twitter, and in the end decided to donate to WorldBike.  Please take a minute to watch their very inspiring slideshow on Vimeo; it will move you!

So, I spent a few hours cutting grapes and loading them into the plastic window boxes that make great carriers on my Xtracycle – especially for “messy” loose cargo.  The weather had been kind of questionable, with storms in the forecast, but I new I either had to go for it, or give up on the idea.  Our fledgeling farmer’s market only takes place once a week on Thursday afternoons.  I knew if I had to wait another week, the grapes would be gone and on the ground.

I got everything loaded (including my rain gear) and rode into town, with the skies threatening to open up.  Sure enough, barely five minutes after I arrived at the market, the downpour started.  I managed to stay dry under the overhang of the nearest building, but I was afraid that the trip would be a waste – fearing that not many people would be inclined to be shopping in the rain.  And what would I do with all of the grapes?

To my delight and surprise, the people were amazing and most generous.  They stuck it out in the rain, were interested in the grapes and finding out about what I was trying to do for WorldBike.  They were intrigued by my Xtracycle – making jokes about it being the “most original pickup at the market”.  The rain also brought several offers of rides home – which I assured them was not necessary.

It was great getting to meet and talk with several of the sellers – a lady who brought in her beautiful tomatoes, and also sells home-made goat cheese, along with a very friendly gentlemen who sells his locally grown grass-fed beef.  We’d actually seen him at the Amish market back in June when we were bike-camping, and he said he remembered us by our unusual bikes.

People took the grapes for jam-, jelly-, juice- and wine-making, and made some very generous donations.  Even in the rain, there was a refreshing sense of community and hospitality around the marketplace; it was wonderful.

Within about two hours, most of the grapes had been claimed, and the remainder I left with the beef man and a couple of the other vendors.  In the end, I matched the dollars that I had collected, and sent WorldBike a decent donation. The whole afternoon left me with such a good feeling – to have participated in our local market, to see the grapes go to good use, and to have collected a small sum for a good cause.  I definitely plan to revisit the market – as a customer. 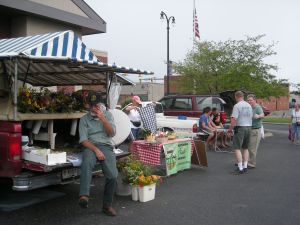 riding home on the greenway - after the rains