one of countless pedi-cabs seen around Chicago; popular choice for Lollapalooza concert-goers at the end of the day

I am behind in posting … and I have been reminded of this fact.  Sorry.  We just returned from a trip to Chicago – nine of us (including boys’ friends) headed up for Lollapalooza 2010.  Just. Amazing.

The bicycle culture has always been vibrant in Chicago, even from back in the day when I was growing up there.  And now, especially in summer, the city is saturated with cyclists of all kinds.  Women in heels on beautiful Dutch bikes, messenger-types on fixies, all variety of commuters on all types of bikes.  Fast bikes, fancy bikes, hip bikes, beater bikes.  I think my favorite (and one I am tempted to duplicate in my own manner) was the fur-covered bike we spotted on Michigan Ave.  Good grief, how I loved that one! 🙂

despite the heat wave, this one apparently needed a little extra warmth

The truth is, we actually hauled two of our own bikes up there with us – but never ended up riding, I am very sad to say.  Our group decided to just stay together, enjoying the music and each other’s company, walking everywhere.  And I mean everywhere.    At first I wasn’t sure I’d be willing to stick it out for 10-11 hours a day in the massive Lollacrowds (estimated at 68,000 each day, I believe), and thought some biking would be my alternate plan if I needed to escape.  However, the whole festival scene, the truly amazing music, the energy of the experience kept me – kept all of us – in the park the entire time.  It was wonderful and unforgettable.

Every night when the festival ended, the mass exodus of concert-goers would take over the surrounding streets of the city, all heading home.  It may look chaotic or even scary – but it was exhilerating, happy, filled with energy and excitement. On the last night, the entire crowd – probably a few thousand people – broke out into spontaneous singing of the chorus to “Wake Up” by Arcade Fire (who were the last to play on Sunday); you’ve probably heard the song from the movie soundtrack “Where The Wild Things Are”. It was just …. spine tingling, and a moment I will never forget. 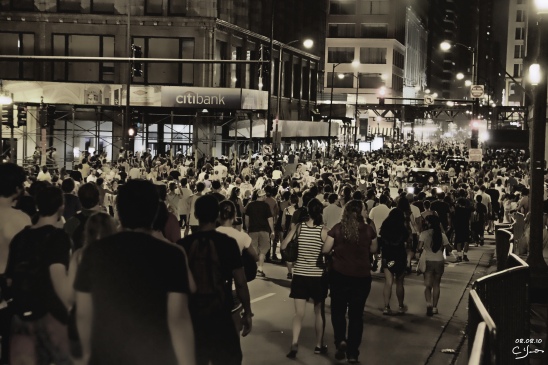 the body of music lovers - leaving and taking over the streets, singing

I think I almost managed to break my camera taking photos, but decided to leave the music and city shots (as I am slowly uploading them) for Flickr, and only put a few of the bike shots up here.  I also may have put myself behind schedule on #330daysofbiking; but the truth is, as much as I would’ve liked to have ridden, I just don’t regret it.

Chicago – I miss you.  It was a magical reunion – from bikes to music to your breathtaking skyline at night.  The enchantment of Grant Park on a summer night, and Lake Michigan in the moonlight.  Not to mention some of the best food in the world, which I have dearly, dearly craved.  Thanks for welcoming me home.  Rock on; bike on!

late dinner in Greek Town ... and a bike on Halsted